What is needed for video surveillance over the Internet?

All of our recording devices and IP cameras can be connected to the Internet. This way you will be able to monitor an area from any place in the world with an Internet connection, using a smartphone or a computer alike.

The recording device or IP camera is connected to an Internet router with a UTP cable, or wirelessly if it supports WiFi.

If it is unfeasible to set up an Internet connection in the surveillance area, routers with SIM cards offered by mobile network operators can be used; they are connected to the recording device or camera with a LAN cable.

After completing a simple network configuration process of the recording device or camera and port forwarding the router, you will be able to connect to the camera from any place in the world using a computer or smartphone.

An example of port forwarding the router for Hikvision recording devices and cameras:

Can I install the video surveillance kit myself?

You can easily install our surveillance solutions by yourselves.

The video below shows how easy it is to set up an analog or HD-SDI surveillance camera kit:

See how easy it is to set up an IP camera kit: 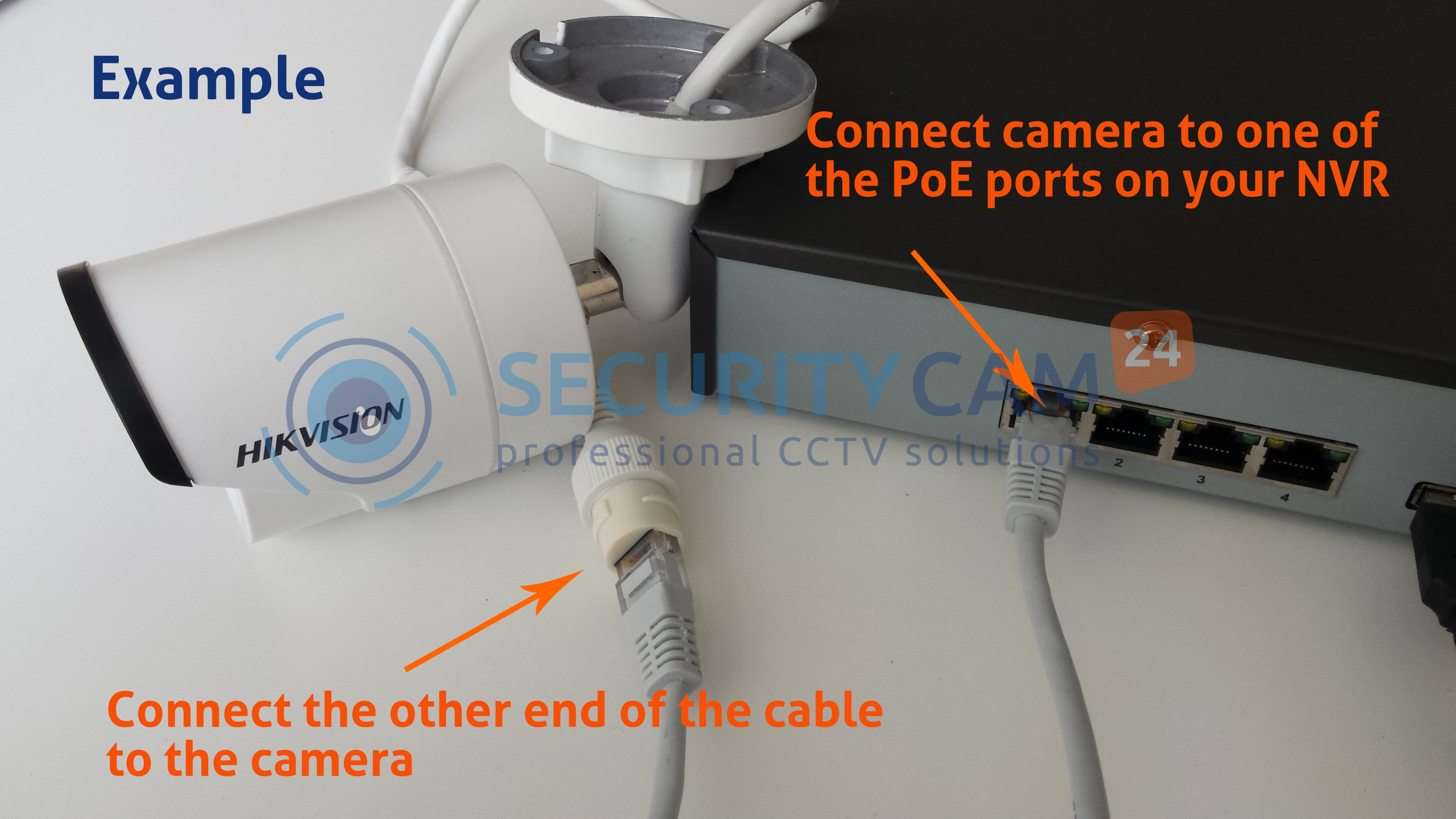 If you have specific preferences, we also offer custom video surveillance kits.

If you encounter difficulties setting up a video surveillance kit, contact us and we will advise you free of charge.

A few simple steps for setting up a video surveillance system:

Setting up an IP camera kit:

Our IP camera kits are very easy to set up - simply plug them in and play. No additional power sources are required because the cameras have an integrated power supply. Our equipment is pre-configured, meaning that you only need to plug in the cables, connect the system to a power source and a monitor, and it will start working and recording video.

Setting up an analog camera kit:

Making the right choice of camera: analog, IP, or HD-SDI?

Analog cameras are an older and cheaper but still widely used technology. Their resolution is measured in TV lines (TVL); today the most popular resolutions are 700 and 1000 TVL. These cameras are connected to a digital video recording device (DVR). The image from the camera to the recording device is transmitted over a coaxial cable or using a UTP (LAN cable) and special converters.

IP cameras is a new and rapidly gaining in popularity technology. They produce much more detailed visuals than analog cameras and are mostly used when there is a need for detail and quality. The resolution of IP cameras is measured in megapixels (for example, 1MP, 1.3MP, 2MP, 3MP, 4MP, and so on). They are connected to a network video recorder (NVR). The image is transmitted to the recording device over a UTP (LAN) cable. A big advantage of IP surveillance systems is the PoE function, which allows transmitting video through the same LAN cable which is used for power. This significantly simplifies the installation process. Note that both the camera and the NVR device must support the PoE function.

HD-SDI cameras are usually installed as a replacement for old surveillance systems, making use of already laid down coaxial cables. As with IP cameras, they ensure a high quality; just like with analog cameras, the video is transmitted over a coaxial cable. HD-SDI cameras are often used as a cheaper alternative to IP cameras. The technology supports 1080p video transmission without sacrificing quality for distances as far as 500 metres.

WiFi cameras are IP cameras which have the WiFi function. The main advantage of WiFi cameras is no cables for the signal transmission. The only thing needed is connecting the camera to a power source. Wi-Fi cameras are a great choice when, for instance, the premises do not allow for installing cables for video transmission. These cameras can be connected to video recording device or an internet router, which enables accessing them from any place in the world via a phone or a computer.

It is worth noting that all of the aforementioned video camera types can be used for surveillance over the Internet. The difference is that analog and HD-SDI cameras require a video recording device, which is then connected to a router. IP and WiFi cameras can be connected to a router directly. As a result, IP cameras make the following arrangement possible: there are two IP cameras at home, one in the cottage and one in the office; the video material from all three can be recorded to a video recording device and watched directly from home. For the setup to work well, the cottage and the office should have a good Internet connection.

If you have any questions about which type of cameras would suit you the best, do not hesitate to contact us!

What are the differences between various camera lenses?

There are also cameras with a varifocal lens, for example 2.8 to 12mm. They allow to change the area of view of the camera by zooming in or out (zooming is usually achieved by manually manipulating the body of the camera).

The size of lens determines how much of the area the surveillance camera will be able to cover. Our camera lenses range from 2.8mm to 12mm in size.

A bigger lens will have a smaller / narrower angle of view and display a closer image of the object or area under surveillance.

The approximate angle of view of different lens sizes:

Below is an example of how different sized lenses display the same image: 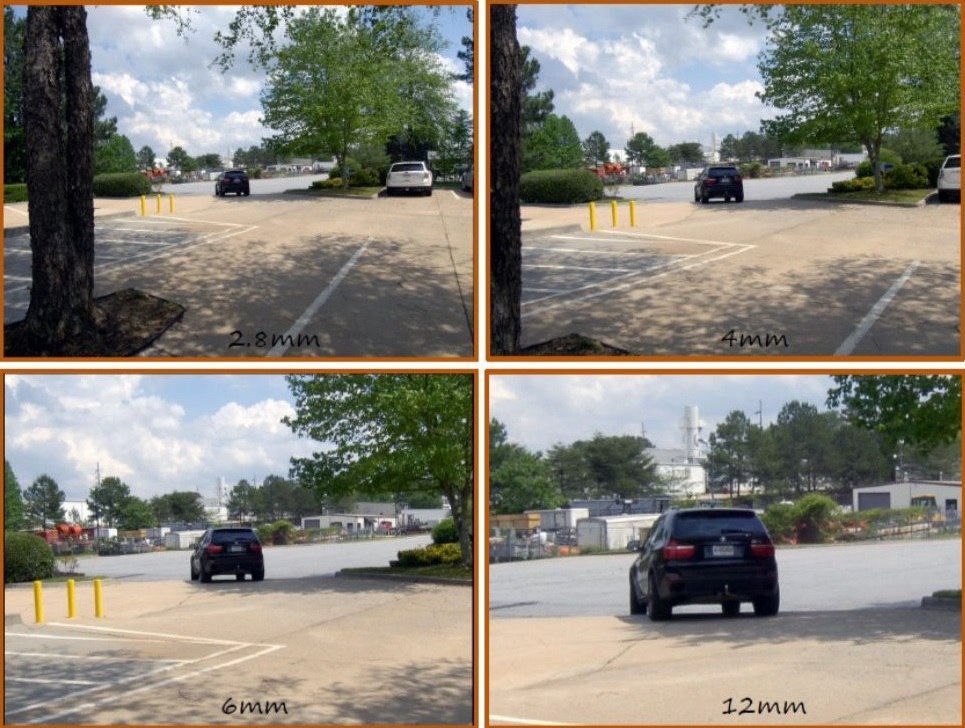